Substrata immersed in aqueous fluids are rapidly covered with a thin film according to the spontaneous adsorption of organic and/or inorganic compounds present in the aqueous bulk flow. This film is called a conditioning film (CF). Depending on their composition, CFs can significantly alter the physicochemical surface properties of the covered substrata, such as surface tension, charge density, and roughness, and therefore play an important role in a subsequent cellular and/or microbial adhesion, resulting, for example, in the fouling of technical or biomedical devices. However, little is definitely known about this process of surface conditioning, which is seen as a first critical step in cellular adhesion.

The aim of this project is to investigate in detail the formation of conditioning films on technical surfaces in situ and their influence on the subsequent bacterial attachment. 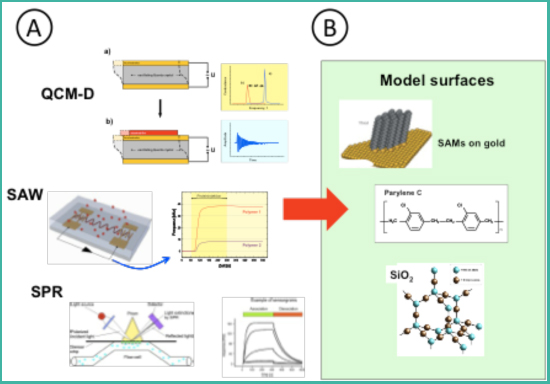 Proteinaceous conditioning films are thought to play a key role in microbial adhesion, leading to the fouling of technical and biomedical devices and biofilm formation, which in turn causes material damage or persistent infections, respectively. Within this project, we demonstrate the potential of quartz crystal microbalance with dissipation coupled to MALDI-ToF mass spectrometry (QCM-D-MALDI) to investigate protein adsorption on different surfaces, enabling both the monitoring of CF formation and the determination of the molecular composition of CFs.