Study of molecular interactions at " solid/gas and solid/liquid interfaces ". Studies of basic processes at the nano level of gained knowledge are consistently transferred to the molecular level of technical systems.

for example: 3 D Matter Made to Order, 3 D Printing-Exzellenzinitiative, etc.

Research Initiatives and Innovation at the IFG

Awards and prizes for employees of the IFG

All employees of the IFG in alphabetical order

Press and KIT Relaeses of IFG

At IFG researchers from all over the world 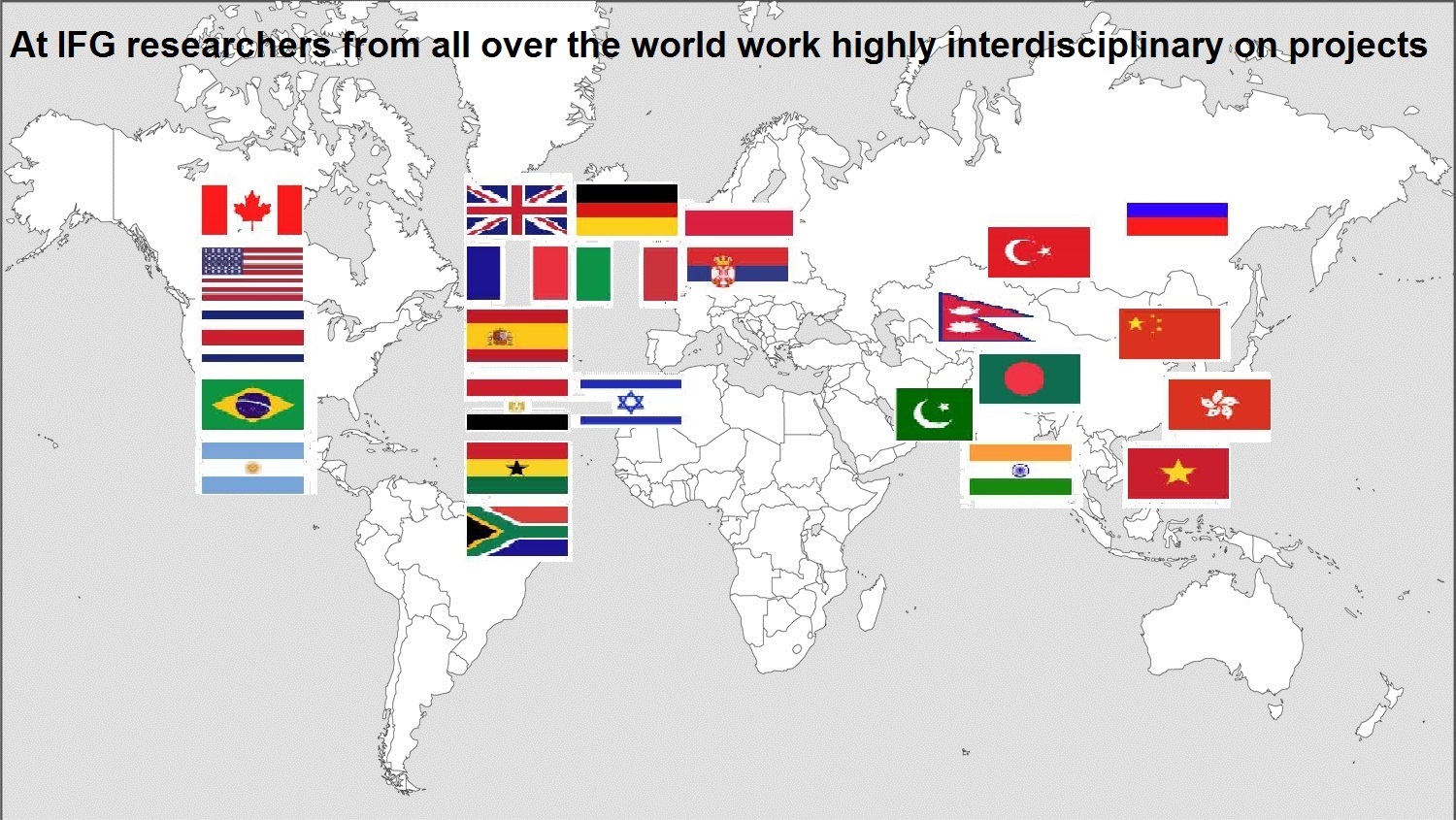 Nanoelectrodes for the Treatment of Neurological Diseases

Catalysts are indispensable for many technologies. To further improve heterogeneous catalysts, it is required to analyze the complex processes on their surfaces, where the active sites are located. Scientists of Karlsruhe Institute of Technology (KIT), together with colleagues from Spain and Argentina, have now reached decisive progress: As reported in Physical Review Letters, they use calculation methods with so-called hybrid functionals for the reliable interpretation of experimental data. (DOI: 10.1103/PhysRevLett.125.256101).

How to Make Catalysts More Efficient

Heterogeneous catalysts based on noble metal clusters and particles play an important role in chemical processes and can effectively reduce harmful emissions. However, they are far more dynamic than assumed so far and many of the occurring effects are poorly understood. The German Research Foundation (DFG) now funds a new Collaborative Research Center at Karlsruhe Institute of Technology (KIT) that is aimed at holistically understanding catalytic processes: “TrackAct – Tracking the Active Site in Heterogeneous Catalysis for Emission Control.”

Noble Metal Clusters Can Enhance Performance of Catalysts and Save Resources

Billions of noble metal catalysts are used worldwide for the production of chemicals, energy generation, or cleaning the air. However, the resources required for this purpose are expensive and their availability is limited. To optimize the use of resources, catalysts based on single metal atoms have been developed. A research team of Karlsruhe Institute of Technology (KIT) demonstrated that noble metal atoms may assemble to form clusters under certain conditions. These clusters are more reactive than the single atoms and, hence, exhaust gases can be much better removed. The results are reported in Nature Catalysis (DOI: 10.1038/s41929-020-00508-7)

On 25th October 2019 Prof. Wöll was awarded the honorary doctoral degree from the University of Southern Denmark.

In honor of his achievments in the development of organic thin films in general and his groundbreaking work on metal-organic frameworks Prof. Wöll was awarded the honorary doctorate from the University of Southern Denmark.

The comprehensive reduction of clinically relevant antibiotic resistances from treated wastewater is the topic of the publication in NATURE Scientific Research, published by the Department of Microbiology/Molecular Biology under the direction of Prof. Thomas Schwartz. Oxidative and membrane based methods are compared in combination and subsequent microbiological risks are described.

Hazardous waste water: What can be done against more and more harmful germs?

An article on this topic was published in the FAZ of 3.4.2019, which also refers to the investigations of Prof. Dr. Thomas Schwartz, Department of Microbiology/Molecular Biology at the IFG. As part of a BMBF project, various municipal sewage treatments plants are being investigated for the presence of antibiotic-resistant bacteria and their distribution in the environment is being shown. By means of extended treatment processes it is possible to interrupt these distribution pathways. This is also demanded by the WHO and the UN Assembly.

An ideal material for photon harvesting must allow control of the exciton diffusion length and directionality. This is necessary in order to guide excitons to a reaction center, where their energy can drive a desired process. To reach this goal both of the following are required; short- and long-range structural order in the material and a detailed understanding of the excitonic transport. Here we present a strategy to realize crystalline chromophore assemblies with bespoke architecture.

Dr. Hartmut Gliemann received the award "Best Presentation" for his talk with the title "Reducing the influence of relative humidity on the sensitivity of ZnO-based gas sensors by coating with metal- organic

Vapor Deposition of a Liquid Crystal Layer with Reactive Molecules Provides Customized Nanofibers for Different Applications – Publication in Science - Researchers at the Institute of Functional Interfaces (IFG) of KIT, as well as at the University of Michigan, the University of Wisconsin-Madison and Cornell University in Ithaca, New York, have now developed a simple and therefore cost-effective process that allows polymer pelts to grow in a self-organized way.

At the conference "Spurenstoffe undKrankheitserreger imWasserkreislauf " of the Dechema Gesellschaft für Chemische Technik und Biotechnologie e.V. on October 23 and 24, 2018 in Frankfurt a.M., Mr. Norman Hembach from the Department of Microbiology / Molecular Biology of the Institute of Functional Interfaces was awarded second place for his poster "Combined advanced processes in wastewater treatment for reduction of antibiotic resistant bacteria".

In the context of the excellence strategy launched by the federal and state governments within the excellence cluster „3D Matter Made to Order” open PhD and postdoc positions need to be occupied at the Institute of Functional Interfaces. Please contact Prof. Christof Wöll.

Dr. Hartmut Gliemann and Peter Krolla (Institute of Functional Interfaces) received the Kajal Mallick Memorial Prize“ together with Prof. Christina Wege (University of Stuttgart) and her group in London. The prize was awarded by the “Institution of Civil Engineers (ICE) Publishing” to the paper with the title “RNA-stabilized protein nanorings: high-precision adapters for biohybrid design” (https://doi.org/10.1680/jbibn.16.00047) as best paper published in 2017 in the ICE Science journals of research in the field of “Bioinspired, Biomimetic and Nanobiomaterials.

Entry of antibiotic-resistant bacteria into public waters - a danger?

Prof. Dr. Thomas Schwartz conducts research on antibiotic-resistant bacteria at the IFG and talks in an interview about hygiene and the danger of colonization.

Small-scale frameworks made of metallic nodes and organic connecting elements are true all-rounders: By combining different materials and varying the pore size and shape, the MOFs (Metal-Organic Frameworks) can be tailored to different applications.

Ceria Nanoparticles: It Is the Surface that Matters

Researchers of Karlsruhe Institute of Technology (KIT) have made major progress in the production of two-dimensional polymer-based materials. To produce cloths from monomolecular threads, the scientists used SURMOFs, i.e. surface-mounted metal-organic frameworks, developed by KIT.

Town of Malsch turns into a living laboratory

In the summer of 2016 a new project of the Institute of Functional Interfaces (IFG) of KIT and the Helmholtz Association of German Research Centers piqued the interest of Elmar Himmel, the mayor of the town of Malsch. The project "Prevention in construction" aims at prolonging the service life of infrastructure as bridges, streets, and buildings.

Researchers of Karlsruhe Institute of Technology (KIT) and Universität Hannover developed novel membranes, whose selectivity can be switched dynamically with the help of light. For this purpose, azobenzene molecules were integrated into membranes made of metal-organic frameworks (MOFs). Depending on the irradiation wavelength, these azobenzene units in the MOFs adopt a stretched or angular form. In this way, it is possible to dynamically adjust the permeability of the membrane and the separation factor of gases or liquids. The results are reported in Nature Communications. (DOI:10.1038/ncomms13872)

Medical implants often carry surface substrates that release active substances or to which biomolecules or cells can adhere better. However, degradable gas-phase coatings for degradable implants, such as surgical suture materials or scaffolds for tissue culturing, have been lacking so far. In the journal Angewandte Chemie, researchers of Karlsruhe Institute of Technology (under the aegis of Prof. Dr. Lahann) now present a polymer coating that is degraded in the body together with its carrier.

At the Jahrestagung der Gesellschaft für Biomaterialien 2016 in Aachen, the Poster entiteled "Nanostructured multifunctional polymer films as hematopoietic stem cell culture substrates" presented by Domenic Kratzer from the workgroup of Dr. Cornelia Lee-Thedieck got rewarded with a poster prize.

Two Become One: How to Turn Green Light Blue

Metal-Organic Frameworks with a Piggyback Structure Open up New Possibilities for Solar Cells and LEDs. Researchers at KIT now showed for the first time that the inner interfaces between surface-mounted metal-organic frameworks (SURMOFs) are suited perfectly for this purpose.

A crystalline layer of hydroxyapatite can form a pressure- and tension-resistant bond to bones or teeth. Scientists from the Institute of Functional Interfaces (IFG) at the KIT have succeeded in growing layers of hydroxyapatite on silicon surfaces.

High awards for chemists of the IFG

Dr. Lars Heinke was awarded the Lecturer Prize of the "Fond der Chemischen Industrie" at the beginning of May. Heinke is investigating thin films of metal-organic framework (MOF) compounds, focusing on remote-controlled MOF materials, which are realized by using light-switchable molecules as building units for the MOF materials.

High awards for chemist of the IFG

At the beginning of May, Prof. Dr. Christof Wöll was awarded the van't Hoff Prize of the German Bunsen Society for Physical Chemistry. The award recognizes his important contributions to the understanding of organic thin films, to the chemistry of oxidic interfaces and in particular to the
characterization of surface-supported metal-organic networks (SURMOFs).

Infrastructure – Prevention Is Better than Cure

Helmholtz Association and KIT Start the Innovation Hub “Prevention in Construction” / Industry, Administration, and Science Want to Extend Lifecycles of Roads and Buildings.

The team of Prof. Thomas Schwartz investigates the pathways of antibiotic-resistant bacteria and antibiotic resistance genes into the aquatic environment and evaluates technical methods to interrupt the spread of these bacteria. The feedback back to humans through contact with water, waste water or in hospitals will also be investigated (microbial dissemination).

Proteins in the wash cycle

How Prof. Matthias Franzreb and ANDRITZ KMPT GmbH intend to change the biotechnology and pharmaceutical industries with swirling magnetic particles.

Arrived in the community:

KIT scientists are developing an automatable detection method for phosphorus that does not require the use of chemicals.

Biology and Technology Episode 6: Reactors from the 3-D printer

In episode 6 of the KIT video series " Biology and Technology ", Prof. Matthias Franzreb tells Carsten how reactors can be produced with the help of a 3-D printer and what these reactors are capable of.

The Jury Prize at the 3D printing competition goes to Siegfried Hohmann and Jonas Wohlgemuth.

Departure to the unknown

How Christof Wöll and Hartmut Gliemann are pioneering a new molecular platform technology.

SURMOF based „Designer Solids“ as Photonic Nanomaterials for Optical and LHs Applications.

Polymer Coatings Based on Molecular Structures

Prof. Dr. Christof Wöll is a new member of the Leopoldina

Processes at the Surface of Catalysts

Towards a More Efficient Use of Solar Energy

Fundamental Findings about the Processes in Photoelectrochemical Cells.