Organic thin-layers on solid substrates, in particular metals, find their applications in the manufacture of sensors, lithography, corrosion protection and as lubricants.

However, the production of an organic thin layer, which is defect free on a hard surface, is not simple and thus very expensive. However the use of a new method of self-organization, has allowed the production of such high quality films.

In this method, a substrate is immersed in the solution of the adsorbed molecule. The self-assembly creates a highly oriented monomolecular layer, the thickness of which depends on the structure of the molecule used. 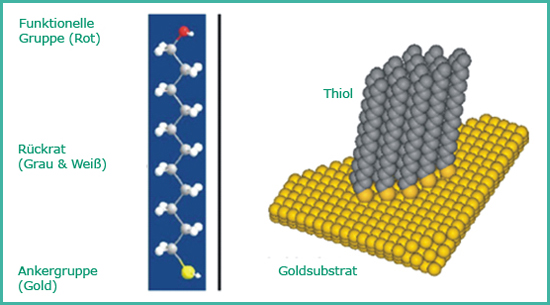 The molecules used must have a suitable anchor group that forms a covalent bond with the substrate surface. They also have a backbone that gives the resulting molecular film stability and characteristic thickness. Finally, they have an end group, which is crucial for the chemical properties of the film surface.

In our current research we are engaged in the production and characterization of such self-assembly monolayers. First and foremost, the goal is the production of self assembled monolayers (SAMs) with optimized properties. Through which both the molecules and the preparation methods used as well, are varied. In addition to that, we will use SAMs as model systems for the investigation of chemical processes at organic surfaces.