The method of near-edge X-ray Absorption Fine Structure (NEXAFS) is used to study the electronic structure of organic adsorbents on metal surfaces and metal oxide surface.

The absorption of X-rays through matter near-nucleus excites electrons into unoccupied molecular orbital. The excitation occurs by emission of Auger electrons which are multiplied by inelastic scattering processes in the sample. The resulting Auger electrons can be detected using a detector. From near edge X-ray absorption fine-structure (NEXAFS) measurements, it is possible to gain insights on molecular orientations and bonding of the adsorbents to the surface.

The excitation of core electron into unoccupied orbitals requires synchrotron radiation of a very high intensity and good polarization (> 90%).

The apparatus used by us to measure NEXAFS spectra is additionally equipped with complimentary surface analytical techniques, namely XPS/UPS, low energy electron diffraction (LEED) and thermal desorption spectroscopy (TDS). Especially for more complex systems the possibility to characterize samples by other methods has been shown to be crucial for providing a unique and reliable interpretation of the experimental NEXAFS data. It consists of the analysis chamber for NEXAFS/XPS measurements, the preparation chamber equipped by evaporators, ion sputter guns and LEED system, a sample transfer system, including the distribution chamber with the park-station and two load lock chambers.

One of the load lock chambers is designed for a use of a special transport box, which allows transferring samples to other systems under UHV conditions. A crucial point is the sample transfer system which at the same time allows carrying out measurements in an extended temperature region. With the present setup samples can be investigated in a temperature region of at least 50—1000 K. This NEXAFS/XPS apparatus was designed and built by PREVAC (Poland) and is operated at the HESGM beamline of synchrotron facility BESSY II (Berlin, Germany). A photo of the setup is presented in Figure. 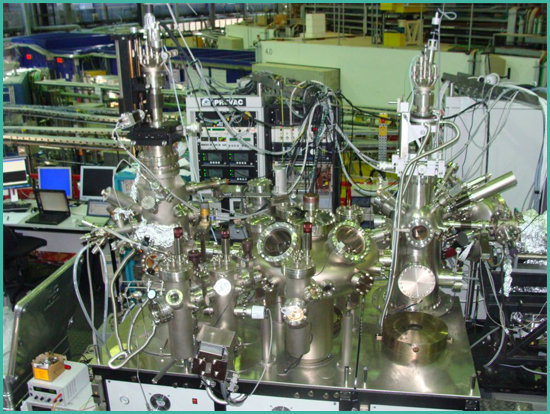 last change: 2014-08-08 KIT – The Research University in the Helmholtz Association