Our project will address a large unmet need, as stem cells have great potential for a broad range of therapeutic and biotechnological applications. Characterization and sorting of heterogeneous stem cell populations has been intrinsically hampered by (1) lack of specific antibodies, (2) need for fluorescence markers, (3) low concentration of stem cells, (4) low efficiencies/high costs.

Our technology will use a fundamentally different approach that (1) does not require antibodies, aptamers, or biomarkers, (2) is fluorescence-label free, and (3) is scalable at acceptable cost. The approach uses intrinsic differences in the composition of membranes of cells to distinguish cell populations. These differences will be detect by SERS and analysed through multicomponent analysis.

We have combined the necessary expertise to tackle this challenge: Stellacci has developed rippled nanoparticles that specifically interact with and adhere to cell membranes (analogues to cell penetrating peptides). Lahann has developed bicompartmental Janus polymer particles that have already been surface-modified with rippled particles and integrate specifically in the cell membrane (analogues to viruses). Liz-Marzan has developed highly Raman-active nanoparticles and has demonstrated their selectivity and specificity in SERS experiments. These Raman probes will be loaded into the synthetic viruses to enable membrane fingerprinting. Stevens has developed a Bioinformatics platform for fingerprinting of stem cell populations using cluster analysis algorithms. The effort will be joined by two SME, ChipShop and OMT, that will be able to develop the necessary microfluidic and Raman detection hardware. 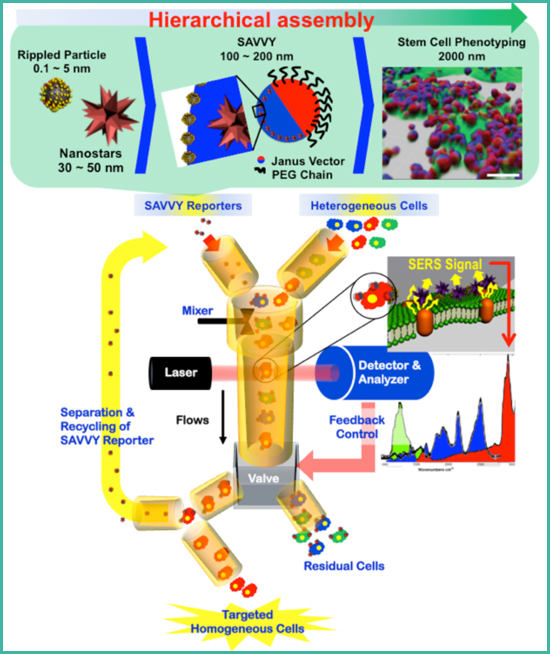